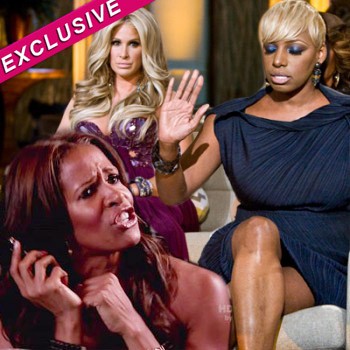 ESSENCE.com: What’s been going on in your life since you officially left Real Housewives of Atlanta?
SHEREE WHITFIELD: I’ve been spending more time with my kids and my family and planning my next move. I’ve got a couple projects that I’m working on that I’m really excited about. I’ve partnered with a company called Xooma to create a 5 million-pound fitness challenge. We’re trying to help a generation get healthy. I’m really excited about it because this is my realm and what I love.

ESSENCE.com: RHOA is so successful. Was it daunting to make the decision to leave?
SHEREE: Well, you know what, I had been thinking about it for a while. We don’t see the show until it airs, or a couple days before it airs. Even when we were taping, there were a few things I wasn’t happy with as far as how I was portrayed. I was going through some really tough things in my life and watching back and seeing how it affected not only my life, but also my kids’ lives, I made a decision that I didn’t want to be selfish. My kids come first.

ESSENCE.com: How do you respond to people who say that you were actually fired instead of quitting?
SHEREE: I don’t have a response to that. I could really care less because I know what happened. It was an amicable split. I was ready to move and I don’t need to explain myself to anybody. I am super happy and I’m moving in a different direction. This is what I know. I’m not about just being on a show bickering and fighting with women. There are big parts of my life that weren’t shown that I’m ready for everybody to see.

ESSENCE.com: Speaking of behavior on the show, is there somewhere you can take responsibility? The producers do put you in that situation, yes, but it’s still you doing it.
SHEREE: Definitely. You’re being put in situations with people you normally won’t be around. You’re doing the show, but at the same time, you can’t control the editing. It’s crazy, the negative stereotype that Black women get about this when it’s not a racial issue; it’s a gender issue. We’re very emotional beings — women period, not just Black women or White women or Italian women or Asian women. We’re all the same way. But unfortunately, [in] the Black community there’s always a microscope on what we do and that’s not fair because you have other shows like Jersey Shore — they’re getting drunk and fist fighting. Then you have Mob Wives and Housewives of New Jersey — they’re flipping tables. Everybody handles things differently. When you have women of other races doing it, they’re not boycotting them. I don’t think it’s fair the stereotype that they put on African-American women, or females period.

ESSENCE.com: So why do you think people react like that to Black women on these shows?
SHEREE: I don’t know. We’re not here to represent the entire Black community.

ESSENCE.com: When you say you were going through tough times during the last season, are you talking specifically about your child support issues with your ex-husband Bob Whitfield or your life in general?
SHEREE: In general. Bob and I have been going through a lot since day one, and then the child support thing happened. All the drama on the show didn’t help. I don’t want my daughter thinking it’s okay when you have women constantly — we didn’t fight — but we bickered and we had arguments all the time. You’re put in situations where you’re with people that you wouldn’t normally be hanging out with.

ESSENCE.com: How are you and Bob now? Have you worked out the child support issues?
SHEREE: No, we haven’t. One day I hope Bob and I can sit down and become good friends and even better parents to our kids.

ESSENCE.com: Are you keeping in touch with any of your co-stars?
SHEREE: Actually I just saw Kandi last night. I wish all the girls the best. The ones that I like and the ones that I don’t like, I wish everybody the best.

ESSENCE.com: Was anyone on that show a genuine friend to you?
SHEREE: I would say there’s a couple, yes. I won’t name them but they know. But I would definitely say there are two people.

ESSENCE.com: You and NeNe [Leakes] showed how much you didn’t like each other on that reunion show. Has anything been resolved between you two?
SHEREE: Resolved how? I don’t think we’ve had a friendship for some years. I’m surrounding myself with confident people so I’m just living life and having a good time and doing me.

ESSENCE.com: Have you heard about former Miss USA Kenya Moore possibly replacing you?
SHEREE: Honestly, I haven’t followed the show since I left. I know they’ve thrown a lot of names out. I wish whoever gets the spot the best of luck.

ESSENCE.com: How is construction on your new home, a.k.a. Chateau Sheree, going?
SHEREE: It’s going really great. You know, that takes time, and I want it done right. I don’t want nobody to come over, blow on it and it falls down.

One thought on “Sherée Whitfield: I Wasn’t Fired from Real Housewives of Atlanta”